Hedgehog is a package that lives in your front end application to create and manage a user’s entropy (from which a private key is derived). Hedgehog relies on a username and password to create encrypted auth artifacts, so it’s able to simulate a familiar authentication system that allows users to sign up or login from multiple browsers or devices and retrieve their entropy. Those artifacts, through hedgehog, are persisted to a backend of your choosing.

A private key is only computed and available client side and is never transmitted or stored anywhere besides the user’s browser.

How can low entropy passwords be used to secure sensitive private keys? Read ahead!

Universal Login, Explained: The Easiest Way to On-Board Users to Your Dapp

So you’ve created a cool new Ethereum dapp, and your first users are ready to try it out!

Could we do that for them? Just take the first and second half of a string?

This of course means that people need to have long passwords, which is unlikley in the general case

Yeah that would work, but:

Created by Decentralized Identity Foundation
https://uniresolver.io/
Resolves DID URIs (ie did:sov:WRfXPg8dantKVubE3HX8pw) to a DID doc

Creating your own DID driver

All you need is a docker container with a /resolve endpoint (can literally be a server + db, doesn’t actually need to be decentralized). I don’t think we’ll want to do this ourselves

This file has been truncated. show original

Sketched out a draft of what this could look like:

This is basically a combo of hedgehog & Universal logins and is similar to what Brooke described when we were riffing on identity in Vancouver: a multisig wallet where keys can be added/voided for different devices. But with optional added ux for users that just want a normal username/password login & easy steps for upgrading security.

Note: we could do this without Universal Logins (ie make our own multisig contract), but I think we’d be duplicating a lot of effort.
_Also note: we can switch out hedgehog js for a scheme similar to the second shard of a ZeroWallet. Really we just need {user’s password + something from server = private key}

For the user, this looks like a classic Username & Password signup/login. No keys, no hashes, no ENS names etc.

Universal Logins is Ethereum-first and makes use of ENS. Personally don’t think this is a big deal. We can easily link into other DIDs & abstract over ENS
Optional: Run our own ENS registry so user’s ENS name can be {username}.fission.eth (or similar)

Do we want to run our own relay network?? Outside of scope?

This was a GREAT write up! just awesome. At a glance I feel very onboard with the hedgehog flow and like that we would abstract away most of the pain points.

I also think (as a naive person) that running our own ENS registry is a good idea, especially because if we dont we’d have to take development time to deal with the auction process.

Filling in my gaps

What do you mean by this? Is this list of steps all in the context of mobile device or that you generate a second key pair for your other device?

Hedgehog mentions its not great for apps with higher security needs (anything finance related for example). If we did use hedgehog in v1 would we be able to give users a “super secure” option for certain apps they wish to login to?

For example every “login with fission” has username and password however you also have an increase security button which would allow a user to set the backing wallet? or some other method that would increase security?

Hedgehog mentions its not great for apps with higher security needs (anything finance related for example). If we did use hedgehog in v1 would we be able to give users a “super secure” option for certain apps they wish to login to?

Yeah, I think this is the equivalent to 2FA – which could be either done in a Web3 / Ethereum way, or actually be an integration with eg Authy / OTP.

This is both “for the user” and for developers, so developers might restrict certain actions until / unless users upgrade to more secure accounts.

At a start – user + pass is the same level of “security” as the vast majority of apps out there today.

Uses Merkle trees and zero knowledge proofs for off chain identity creation and claims, and relayers “batch” on to the chain 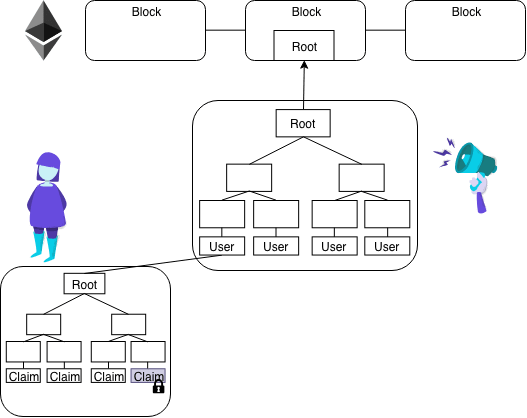 Yup think @boris nailed it in terms of the hedgehog flow being equivalent to normal username/password on the web. The way this whole setup differs from normal apps is that your identity is tied to your wallet which. So you have the same login for every app. So if you use an app that requires more security (equivalent of 2fa basically), then you need to upgrade your entire identity to that level of security. It isn’t on a per-app basis.

I did not follow the saga of these ERCs so I’m piecing this together posthoc.

It looks like Universal Logins did implement 725v1, but stripped that out and is doing their own implementation now. But they also lost key purpose with that (ie, management, action, etc). So every key is treated exactly the same. It seems like it would be good to reimplement this functionality following the 734 spec.

Meanwhile, the current wallet seems to implement a modified version of 725v2.

Meanwhile 735 is the spec for adding claims to an identity. I don’t think that we need to do this part of the implementation. I think it would be good enough to have a key purpose be IDENTITY, and that way we can link back multiple identity implementations to a user’s wallet (say they have an Ethereum native identity, and a Sovrin identity and want to link them both to their wallet)

Since hashes are one-way functions, you can:

In other words: knowing a key gives you access to every child dir & file without giving any information about the parents.

Paper on the subject:
https://ieeexplore.ieee.org/document/4032481

Peergos, where I first came across the idea and pretty similar in some ways to what we’re doing:
https://peergos.org/

After some research, I don’t think this is going to work out as one of our initial identity offerings.

Found it pretty difficult to determine what exactly was happening under the hood.

My best read is that it’s a permissioned network of nodes that hold shards of your key. There are “incentive structures” (staking where if you commit fraud, your stake gets slashed) in place to prevent them from leaking shards or colluding to reconstruct your privkey. OAuth is just used as a method for you to display to a node in the network that you are who you say you are.

I’m uncomfortable with this setup because it’s not terribly decentralized. It seems very easy for nodes to collude, and reconstruct your privkey. I’m not convinced that the incentive structures are any stronger than just trusting your privkey with a centralized entity.

Also this scheme is only as secure as OAuth is. So if your token leaks, your screwed. And if the OAuth provider turns out to be a bad actor, they can capture the private keys of everyone using their service.

I might have some of this wrong, as I said, I had a pretty hard time gathering info from their documentation. As Brooke suggested, I’m planning on reaching out to them to get some clarity.

Can’t get privkey from web3 wallet

This is the big clincher. They act as a provider that you pass to an instance of web3.js, similar to Metamask. For security reasons, you can’t just get the privkey out of web3. So Torus won’t work at all for us in the beginning when we’re more concerned about privkey encryption than we are about eth txs. This would really only come in down the line as a key recovery option