Technical interviews are garbage. Here’s what we do instead - Farhan Thawar 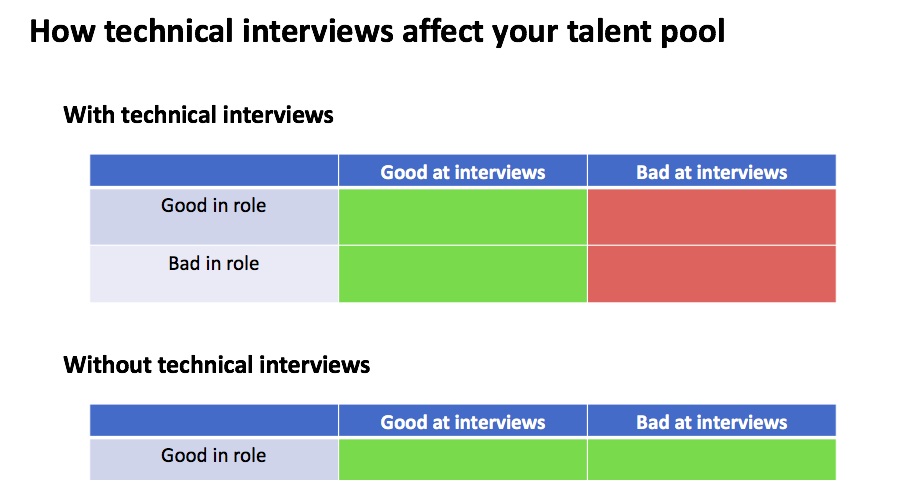 Technical interviews are garbage. Here’s what we do instead

Farhan Thawar @fnthawar talks about his method of hiring people to work at the company with no technical interviews (just one hour of assessment) but instead coaching and feedback and actually working with the company during a probationary period.

Read the full article to the end for Thawar’s pushback on common issues.

Interviews may select for people that are good at interviewing:

Let’s revisit why we have interviews in the first place. They’re supposed to be an extremely accurate predictor of future performance. The upfront investment, which can be heavy (e.g. my own interviews at Amazon and Yahoo exceeded 10+ hours each), should be time well-spent evaluating whether someone would be an exceptional contributor in the role.

However, the data suggests that there is very low correlation between interview scores and actual job performance

On top of being a poor predictor for folks coming in the door (false positives), it’s also a biased process for discarding the loads of folks who would be a great fit at your company (false negatives). Tons of great people, and, disproportionately, women and minorities, can perform less well at technical interviews but be great in role.

Let’s say that you’re evaluating race car drivers. Would you sit them down for seven hours to ask them about their favorite car color, interests, and hobbies, and then decide based on whether you want to get a beer with them? Hell no. You’d put them in the driver’s seat and see how fast they are. If they blow you away, you have all you need.

Put them in the fucking car.

It doesn’t matter their age, their background, their gender, or their hairstyle. Heck, you don’t even need to see the person in the car, and in fact, it’s actually better if you don’t. The question is, can they do the job? If so, great. And that’s basically our approach. Less interviewing, more focus on outcomes.

We interview people who fit the basic criteria, and for less than one hour (sometimes 15 minutes!). If the person seems capable and there aren’t major red flags, we hire them (we use an extremely coarse grained filter). If we have five applicants, sometimes we’ll hire all five. They’re then on a 90 day probationary period to see if they work out, with check-ins at 30, 60, and 90 days. And what of the six hours we saved on each technical interview, you ask? We spend them coaching.

During this time, they get to show us how fast they can drive. Instead of a bunch of anecdotal feedback from the handful of people who met them during an interview, we get incredibly detailed feedback from the whole team who is working with them for 40 hours a week. We can evaluate their impact on the organization.

What actually works for your organization? There seems to be a trend:

For yourself, find out what works in your practice. As the angel investor and partner at Homebrew, Hunter Walk, put it in an article titled, Try Before You Buy, startups are “ditching the interview process as final arbiter of employment and instead opting for some sort of ‘try before you buy’ arrangement.” That’s everything from having potential employees work as contractors on one single project to allowing them to work with your team to develop a pitch. This approach has it’s downsides, but I think Hunter and I agree that they’re vastly outweighed by the upside of building powerful, diverse, and effective teams that win.

Try Before You Buy: Why Smart People & Smart Companies Are Ditching the...

Once is a coincidence, twice is a trend? Increasingly I’m hearing about talented folks and sought after startups ditching the interview process as final arbiter of employment and instead opti…

The main counter argument that I’ve heard is that this selects for people that can afford the long period of uncertainty. Also lot of people can be good during the tryout period and show their true colours afterwards (have seen this firsthand). This isn’t to say that it’s a bad strategy, but like with everything there’s tradeoffs.

I think it can select for privileged people — absolutely. For instance — I don’t think this works for junior hires at all?

Canada already has a 90 day period as mentioned.

When you start thinking about remote / global hiring — you’re mainly dealing with contracts and really need to think about what does it even mean to be a “full time” person?

For instance, you’d have to write the contract to actually deal with 2 week notice — for both employer and employee.

I think from reading this the first time — the screening that does happen before you get a 30/60/90 day contract — is important to dig into.

One thing to remember is that this technique adds no additional uncertainty (it just makes the 90-day probationary period explicit vs implicit). Spending 8 hours interviewing doesn’t guarantee you won’t be let go for poor performance in the first 3-months.

I contend the time is better spent giving feedback in role (and on actual performance) vs at the interview stage.

I also found this extremely effective for junior hires

Thanks @fnthawar! I agree, it’s just not something that people think about, that those first 90 days are really when employer and employee should both think about if this is a fit.

My comments were about the realities of global hiring – where everyone outside of the company’s “home country” are going to be on long term contract, not employees.

If you want to hire people full time, but you don’t have an organization in a particular company, you can’t make them “employees”. The solution to this is Professional Employer Organizations, or PEOs. They have a registered company in the country where you want to hire someone, you pay them and sign a contract, and they hire your staff person as an employee. This includes various other paperwork around NDAs and copyright and so on. Opolis https://opolis.co/peo/ The path to decentralized empl…