This is a longer-form writeup of what I’ve been thinking in response to Brendan’s LDFile ideas.
The context is we’re collaborating with Qri (and Brendan especially) on two implementations for the next WNFS. Brendan is working on wnfs-go while we’re working on a typescript implementation.

Brendan raised that he’d have a use-case for something he calls ‘LDFile’ (Linked Data File). This would be something tagged differently than regular files or directories. The way I understand it so far is that he’d want to be able to use files more like dag-cbor vs. using UnixFS today. That is, having something better than a “here’s some huge byte array” abstraction. This in turn implies that you’d have more control over the resulting DAG you’re building, which I think is another great benefit.

For the public side the specification effort should be pretty small, we would simply add another file type “LDFile” and tag the content CID of LDFiles with that. Everything else would either already work as expected (pinning/syncing) or is just a matter of programming API, not specification.

For the private side, it’s harder. The issue is we can’t simply link between blocks using CIDs and expect e.g. pinning to work, because these CIDs will be encrypted inside the private filesystem blocks. Additionally, there’s a choice we need to make about what keys to use to encrypt which blocks. (Do we use the same key for all blocks? If not, do we need a ratchet per block?, etc.)

It should now be clear that we can’t use plain dag-cbor for the private side. As a mental model I’ll be writing about “taking a dag-cbor graph and ‘making it private’”. I don’t think it’s supposed to work like this, but I think it makes it easier to think about & it implies that we can support everything that dag-cbor supports today plus more, as long as we’re not removing features from dag-cbor, if that makes sense.

To make a dag-cbor graph work with the private filesystem, we take each block in the graph and encrypt it with a random key, except for the root block that is referenced in the LDFile header. That block should be encrypted using the keys that the ratchet in the header generates.

To make it possible for entities that know the root block’s key to encrypt the rest of the graph, we should add them to every link before we’re encrypting the blocks. Also, the CIDs should reference the hash of the encrypted blocks instead of the “original” blocks.

The resulting links will thus be a { key, cid } pair. (There’s some bike shedding to do on what this should encode to exactly. E.g. it could be its own CBOR tag.)

To solve the pinning problem I propose we “just” reuse the private HAMT, similar to how we use it for private files & directories today. (As a recap for anyone not familiar with the private HAMT: It stores encrypted blocks as blobs without further links under keys that are saturated namefilters which can be checked against for write access.)
This means we need to walk the DAG and put each block into the HAMT.
The key that each block should be put in should be the bloom filter saturate(add(ldFileHeader.bareNameFilter, [block.cid, block.key])).

With this construction we arrive at these trade-offs:

As you can see, what distinguishes LDFiles from regular private files & directories is that they’re a single entity as far as WNFS is concerned: You’re meant to only provide read and/or write access to the LDFile as a whole, never only a part of it.
I think that’s the right trade-off given I think the main use-case for this is files that only make sense to an application as a whole, and I think we don’t want to define merge-semantics for blocks within those files in general, only for their headers. (And then the application can have its own custom merge semantics.)

You are exploring the idea of not separating storage of data from a way of making sense of it at the point of creation, to support its organic growth reuse repurpose in meaningful/intentional ways beyond the goals it was created in the first place, reuse and remix at will is what is needed.
We are treating information (that is people in disguise) as the new oil is deeply problematic to say the least.Coupled with app centric views and the proliferation of layers

The reason I am interested in WNFs because it can be used to merge the storage with a Mindgraph, a way of articulating,
making explicit, co-evolvable at the meta level the semantics/intent behind the data along with the webnative means of making use of them, repurpose reuse.

Hope to have discussion about this, possibly after the holidays

I am involved with the “Personal Knowledge Graph Working Group” organized by https://www.linkedin.com/in/alanmorrison/

You may find this instructional 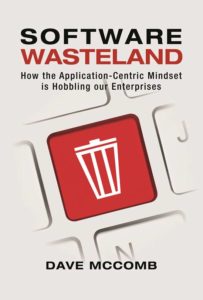 Software Wasteland is the book your Systems Integrator and your Application Software vendor don't want you to read. Click here to learn more.