Working in Public: The Making and Maintenance of Open Source Software 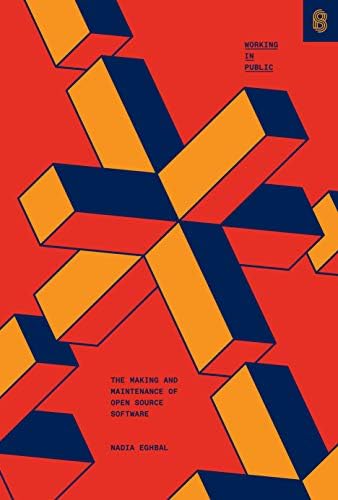 Working in Public: The Making and Maintenance of Open Source Software

Open source software–in which developers publish code that anyone can use–has long served as a bellwether for other online behavior. In the late 1990s, it provided an optimistic model for public collaboration, but in the last 20 years it’s shifted to solo operators who write and publish code that’s consumed by millions.

In Working in Public , Nadia Eghbal takes an inside look into modern open source software development and its evolution in the last two decades–and its ramifications for an internet reorienting itself around individual creators. Eghbal who interviewed hundreds of developers while working to improve their experience at GitHub–argues that modern open source offers us a model through which to understand the challenges faced by online creators. She examines GitHub as a platform; how open source projects are structured; the projects’ roles, incentives, and relationships–and their heretofore unexplored maintenance, via the work that software requires of its creators and the costs of production that must be maintained. Eghbal scrutinizes the role of platforms–like Twitter, Facebook, Twitch, YouTube, and Instagram–which reduce infrastructure and distribution costs for creators, but which massively increase the scope of interactions with their audience.

Open source communities are increasingly centered around the work of individual developers rather than teams. Similarly, if creators, rather than discrete communities, are going to become the epicenter of our online social systems, we need to better understand how they work–and we can do so by studying what happened to open source.

Hi I wrote a book! It's called Working in Public, and it's the story of modern open source and its implications for online communities and the creator economy. Now available for pre-order on Amazon: amazon.com/dp/0578675862/

I've published a book about online communities, told through the story of open source developers. It's called Working in Public: The Making and Maintenance of Open Source Software, now available for pre-order on Amazon.

Open source has always reflected the broader social trends of our online world. In the late 1990s and early 2000s, open source inspired people looking to understand the nascent “open web.” Both were about maximizing access and participation, where contributors come together in service of a bigger project.

Since 2016, however, we are undeniably moving into a second epoch of the social web, one in which “public” no longer equals “participatory.” This shift requires that we refactor our understanding of online communities.

It seems clear to me that individuals, not just groups, are defining the next generation of the internet. Social platforms don’t just connect us to people we already know, but also serve as a stage for us to discover, follow, and interact with creators. In the shift from “friends” to “followers,” these communities became parasocial in nature, centered around individual creators, rather than a distributed crowd.

Thanks for @daffl for the reminder to publish a recommendation for this excellent book!